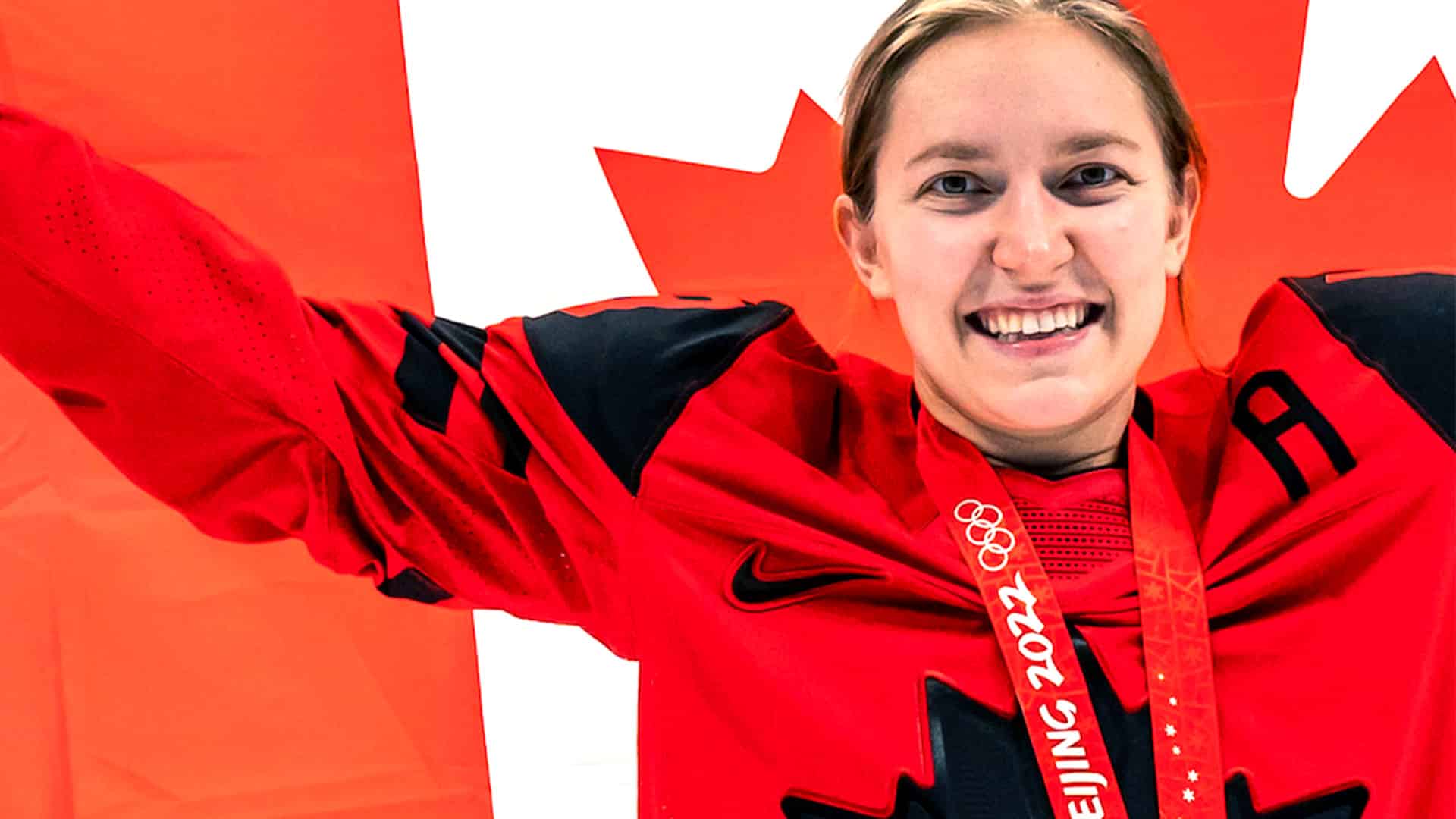 An 11-year-old Brianne Jenner watched the Canadian women’s hockey team win gold in Salt Lake City in 2002 and dreamed of being an Olympian.

She made that dream come true at the Sochi 2014 Olympics as part of Canada’s gold medal-winning  women’s squad. She later added a silver with Team Canada at PyeongChang 2018. And this February in Beijing, she competed in her third Olympics helping our women’s hockey team capture another gold and earning herself tournament MVP honours in the process.

Jenner spoke with us about her Olympic journey, why having a great team culture matters, inspiring others and increasing visibility for women’s hockey.

Hockey has played a major role in your life for a long time now. What are some of the things that you still really love about the game and what drives you to keep growing as a player and a leader?

My teammates are a huge inspiration for me. What we’re collectively working towards is something that drives me, and I also really love the lifestyle of being an elite athlete. I love the training. I love the discipline. I just really enjoy everything that goes along with it.

What an important lesson that you’ve learned from becoming – and staying – an elite athlete?

One that really stands out for me from being in a high-performance sport for so long, is just the necessity of always adapting and finding ways to tweak what you do, and to look for ways to marginally improve. I think it’s a lesson that I apply to all aspects of my life.

It’s difficult to make the national team and play at a level that I do. But in order to stay on the team and continue to improve as you get older in the sport, you have to get creative, constantly push the envelope and see where you can get better and gain a slight edge. I think just having that mindset of always being ready to learn is something that hockey kind of forces into you, especially if you want to continue to play for a long time.

This winter was your third Olympics. What made this one special for you?

Well, they all have their unique story. I think this one was obviously quite different from the past two, and because of the pandemic there were a lot more curve balls.

Even the four years leading up to it were just so different and full of a lot of adversity for our group. To be honest, we had a stretch of some subpar performances that were not the outcomes that we wanted. So, we did a lot of looking in the mirror and made some really great changes to our culture. I think you saw those changes translate to the ice.

I think what made this group so special is the people. It’s really the most fun hockey season I’ve ever had, and the most close-knit team I’ve ever been a part of – staff included. Even when times were tough, we were there for each other.

The game against the Russian Olympic Committee was definitely unusual with the delay and wearing face masks to play. How did the team’s ability to adapt help with that once the puck finally dropped?

Rolling with the ups and downs was something that we wanted to be part of our identity. We wrote it down, we spoke about it and we practiced that kind of mantra all throughout our season.

For that particular game, we had to adapt on the fly. One of the biggest strengths of our team was just kind of rolling with the punches, staying loose and being ready to do our job. It was so cool to see Olympic rookies being able to have that mindset, too. I have to give a shout-out to (goalie) Emerance Maschmeyer because she was going in for her first Olympic start. As players, the masks can be difficult to wear, but as a goalie, it’s a whole other story because it’s a lot tougher to see. It didn’t phase her at all. She was like, “Bring it on, let’s go.”

Getting to the Olympics and competing in a gold medal game obviously takes a ton of physical preparation. How important was the mental preparation?

It was so important for us and just as big as any physical preparation. We really focused these last few years on building our confidence. I think one of the biggest changes we made was just allowing ourselves to let go of past performances, to have a blank slate and write a new story. It let us have a weight lifted off our shoulders from the past performances and just go out there and be ourselves, play free and up to our potential. I think that mindset really helped us as we started the season.

This is long overdue, but we’re starting to see more momentum in all female sports. What do you think needs to be done to push women’s hockey and other female professional sports into the mainstream?

A lot of it is just visibility. The more that people are able to see female athletes represented on TV, I think the bigger the fanbases will grow. The product for women’s hockey is at a great place – it’s fast, exciting and competitive. There’s a lot of talent on the ice, and I think people are ready to see those players more than every four years. If we’re able to get more games on TV and more visibility for young athletes, especially for females to see, I think things would really take off.

And honestly, there’s so much momentum in our sport right now coming off of the Beijing Olympics where we had the most watched event. The data shows that people want to see women’s hockey on TV. I think it’s certainly at a place where the sport deserves it as well.

You use your voice and your platform to support different causes and initiatives. Why is it important for you to give back and find ways to elevate others?

I think there’s a responsibility as an Olympian to be a good role model for young Canadians and for your communities. I take that role seriously and hopefully I don’t do too bad of a job with it.

How has your experience been with insurance in your personal and professional life? Is there anything you’d like to see changed about it?

I would say now that I’m a mom, I have a much more appreciative relationship with all my insurance policies and making sure that if something were to happen, that my family’s taken care of.

Before becoming a mother, I probably looked at insurance policies with a bit more disdain for the money coming out of my bank account every month. But now I have an appreciation because becoming a mom certainly puts everything into perspective and having that peace of mind is so important.

Want to learn more about Brianne Jenner? You can find her website here.